I’m the oldest of four siblings (the only autistic thereof, as it happens). Two sisters – and a brother (who has given me a sister-in-law and my two younger nieces) but this post isn’t about him. (Sorry, Bruder mein!) This is about my sisters, and how wonderful they are.

But first… one issue that I’ve faced through most of my adult life, though it’s not one I talk about to many people, is that except in very rare cases – for me, Out Of Sight does indeed mean Out Of Mind. This has even included my siblings… partly because of my childhood experiences with the communications chasm that can occur between autistics and allistics, and partly because, well, I’m often not the best communicator unless it’s about something of immediate importance to me. (Not to say that my family and friends aren’t important, but if they’re not right at the forefront of my mind, I can go weeks without thinking to contact them.)

My youngest sister is a Speech Language Pathologist. She decided that would be her career path in her second year of undergrad. She put in a huge amount of work to get to where she is today, and I’m proud of her for all of that, and happy for her that she has a career that is fulfilling and can make her happy. Those are so important to one’s mental health.

Because there are a certain percentage of autistics that need speech language therapy, and because my sister got her Masters in Speech Language Pathology in the United States, where SLPs can diagnose autism, she’s been well trained in the signs. Asperger’s was mentioned to me as a possibility by my mother (and indirectly my brother) back around 2001/2002, and I tried for an assessment then (as mentioned in my early post Asperger’s Diagnosis: Official and Non-). However, because of the very unhelpful result from Queen’s Street Mental Health, the possibility was shelved for several years.

In 2007, this sister was working on her Communicative Disorders Assistant diploma, and sent me some more detailed information on autism (again, see post mentioned above). This time, it was a revelation, because suddenly I saw a lot of myself in the descriptions.

Then when I moved to Newfoundland in 2011, this sister was doing an Anatomy and Physiology course at the University (required to practice Speech Language Pathology in Canada, but not in the States, which is why she needed to take it as an extra). Over the 3/4 of a year that she stayed in Newfoundland after I arrived, she taught me a lot more, including about deep pressure hugs, and some of the other things that I never realized were affected by the fact that I’m autistic. (I already knew that sensory issues were a Thing from the 2007 info.) It helped immensely.

(The two of us also spent several hours one fall evening talking with our father in the kitchen, and coming to the conclusion that he is likely on the spectrum as well.)

And even more, my youngest sister was the penultimate reason for my setting up this blog. She was the one who provided me with my first links to the blogs of other autistics, and that was the ultimate cause for this blog to exist.

Our middle sister is a teacher in… Junior High, I believe it is. She’s also the staff representative for the LGBT* group in her school, and a staff representative in the “Free the Children” service organization. (They just finished “We Week” (turning “Me” into “We”) this past week. Thursday, the day I arrived, was Pajama Day. *grins* I didn’t even notice she was wearing PJs until she explained why she was wearing them on the way to the luggage carousel.) She’s also given me my oldest niece, and my two nephews. (She’s the one who wrote: Guest Post: My Sister.)

She’s a wonderful mother, and a caring teacher – you can tell from the way she talks about her students and the activities that they’ve been doing.

I love my nieces and nephews dearly. But… children can be loud, and have high-pitched voices at times, and… gods, I mentioned to my mom this past afternoon that I now definitely sympathize with her as a parent for what we were like at the ages of said nieces and nephews. *wry grin* And younger children (my younger nephew is going to be 3 in a few months) have trouble understanding about sensory issues.

And my middle sister is so accepting of the fact that after we had appointments this morning and swimming this afternoon, and then a lovely all-you-can-eat sushi dinner out at a restaurant this evening… that I needed to go hide away until sometime around mid-morning tomorrow. She definitely appreciates the fact that I’m willing to act as a child-herder, but she also understands that I literally need time alone. That sometimes I am going to get overwhelmed with sensory stuff and busyness and that to feel comfortable, I need to check into the hotel tomorrow/today around the check-in time, rather than waiting (although I can then come back here until after dinner).

[Update: Feb 21/16, 11:50] And you know what else? Because I’ve started on a gluten-free diet (though not because I’m gluten sensitive, but because I found info saying it’s healthy), she went to the trouble of making me – making me – gluten-free bread this morning, in between making brunch and dealing with her kids. I took a picture, because… she made it for me. 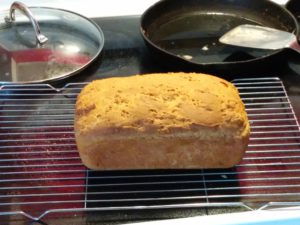 The gluten-free bread my sister made me.

You know what? I really do have some pretty wonderful sisters. [I think I must have some of the greatest sisters in the world.] Over the last several years they’ve given me an immense amount of support (all my family has, but like I said, this post is for them), and I really do appreciate and love them very much. That kind of support and understanding is so important, and it deserves public recognition, as far as I’m concerned.