Ellen Notbohm, the mother of two children, one of whom is on the spectrum, has a number of books out about children on the spectrum, acting as the voice for her son. One of them, Ten Things Every Child With Autism Wishes You Knew, is now in the ASNL Barbara Hopkins Library. As I was early to Social Club today, I noticed it and decided to read it to see whether I agreed with what was in the book.

My personal answer? It’s excellent. There are some minor things that I disagree with (noted below), but the vast majority of it (and every one of the “Ten Things”) involves points that I am in full agreement with. It’s also both well-written and quite respectful of autistics. (Including the fact that although she uses “child with autism” throughout, she both explains why she prefers not to use the term “autistic”, and also that a number of children, when they grow up, prefer to be referred to as “autistic” rather than “adult with autism”.)

Okay, first things first. This book is not written for autistics themselves (although it’s worth reading from a teen and/or adult autistic perspective), but for parents, teachers, aides, paraeducators, etc., though mostly aimed at parents (she has another book called Ten Things Your Student With Autism Wishes You Knew aimed more at teachers, etc.). It’s written by a mother who feels that this is one of the best things she can do to advocate for her child, and other children on the spectrum – lending her voice to them to encourage understanding. Throughout the book she emphasizes the fact that autism involves being differently abled; in fact, she refuses to use the term “disorder” unless it is part of a “title/name” diagnosis, such as with ADHD. (See my post Revamped Links: Neurodiversity Paradigm for why I approve.) She also strongly encourages people to look at the positives of autism; to reframe their ideas of what exactly challenges are. Again, something I definitely approve of.

The books consists of what I would consider to be four sections. There’s the introduction, in which she tells us about herself and her son, and outlines the chapters (the ten things) themselves. There’s the chapters, each of which covers a different one of the ten things, though there are interconnections mentioned. Then there’s the afterword, thoughts and transitions, and evolution section, which sums things up and talks about a variety of elements including the meanings of the words we use to frame “what is autism” and (because of being a second edition) how things have developed as her son has gone through and graduated high school. And finally, but hardly least important, is the self-reflection and discussion section, which contains lists of questions based on each chapter and section for both self-reflection and discussion among parents, teachers, aides, etc.

With each section and each chapter, she provides examples and details from her son’s life (and hers, as his mother) to help explain and/or broaden understanding of what she is trying to get across.

I’m going to do a rundown of the chapters here, including the titles of each chapter, the basics of what she includes, and what I think of them.

Chapter 1: I am a whole child: In this chapter, Mrs. Notbohm (interestingly enough) uses some of the points that adult autistics use to defend our use of the word “autistic” to defend her use of the term “child with autism”. In essence, she points out that while autism affects everything about how we perceive and interact with the world, it is not the be all and end all of our existence. We are not defined wholly by our autism, she points out. There are a lot of other elements involved. (I am a writer, an aspiring novelist. I am my cat Imber’s Mummy-Cat. I am my parents’ daughter. I can be as stubborn as a mule sometimes. Autism informs and affects all of these elements of who I am, but it is not everything that I am.)

Although she doesn’t mention puzzle pieces in this chapter (in fact, they are not mentioned anywhere throughout the book – Yay, Mrs. Notbohm!), the title and theme of this chapter can also be taken as a refutation of the “missing piece” element that so many people (I’m looking at you, Autism Speaks) use to define autism.

Chapter 2: My senses are out of sync: Excellent chapter. Really excellent. This chapter goes into each of seven senses – sight, hearing, smell, taste, touch, vestibular, and proprioceptive – with an explanation of what the sense is, followed by descriptions of possible reactions to both hyper- (heightened) and hypo- (reduced) versions of these senses. It can’t cover everything, of course, but it gives the basics, including those potential reactions. An excellent starting primer for anyone dealing with autistics (whether child, teen, or adult) about sensory issues. This chapter also mentions meltdowns a bit, in preparation for the chapter devoted to meltdowns.

(No, I cannot say enough praise about this chapter. Why do you ask? 😉 )

Chapter 3: Distinguish between “won’t” and “can’t”: Another very, very important chapter. Distinguish between making a choice about something, and an inability to do or cope with (or whatever) something. This is (I think) the first but not the last chapter to discuss expectations, and not expecting things from your child that they simply cannot give you (at least at that time) because it is literally impossible for them.

Chapter 4: I am a concrete thinker. I interpret language literally: Again, so important. This chapter looks at word and phrase choice used to communicate, and points out how absolutely illogical the English language really is. Mrs. Notbohm quotes Doug Larson about “If the English language made any sense, a catastrophe would be an apostrophe with fur.” She goes on to explain about phrases like “raining cats and dogs” and even things like “wait a minute” and points out the difficulties involved for literal thinkers to understand what’s really meant by these phrases. Included in the chapter are samples of four different types of phrasing (with four examples each) and what should be said when talking to a literal thinker about them.

As your child gets older, they may start to understand such figurative phrases better – for example, I use analogies to help understand concepts that aren’t terribly concrete for me – but I still have the immediate impulse to do such things as answer to the minute (or second) when someone asks me what time it is. (Apparently not only did I used to answer to the minute as a child, but I would look at my watch and wait until the seconds came around to 0 to answer.)

Chapter 5: Listen to all the ways I’m trying to communicate: This chapter is the “all behaviour is communication” chapter. Mrs. Notbohm looks at behavioural cues (including meltdowns), echolalia, and various other ways of communication in this chapter. Not a huge amount to say about this chapter, other than “good” and “well-written” (and “important”).

Chapter 6: Picture this! I am visually oriented: Another excellent chapter, though this is the one where I have a minor disagreement. This disagreement (see below) does not, however, negate the points in this chapter.

This chapter goes into details about using visual aids to help explain things to children (and heck, adults!) on the spectrum. It looks at the usefulness of written (or pictured) instructions, visual schedules, etc. It points out that not only do a lot of autistics rely on vision as our primary sense, visual input also gives us the opportunity to read/see it, think about it, and come back to it. This is hugely important, especially if there are any “issues” with processing speed. I know that I sometimes have trouble understanding verbal instructions, and I’m an adult who has been aware that I learn visually and have sensory issues for years. The ability to come back and re-read/see again the schedule or the instructions or whatever it is that I’m dealing with is key to my ability to do things.

What I disagree with in this chapter is the comment that most autistics think visually (see my posts on imagination and modes of thought). I can’t fault Mrs. Notbohm for this, however, because she was getting her information from an autistic – Temple Grandin’s Thinking in Pictures. So she was listening to autistics; it was simply that the ones she was listening to had incorrect information. Temple Grandin was overgeneralizing from her own mode of thought – forgetting the element about different people having different perspectives.

That point of disagreement, however, is not vital to the overall thrust and point of the chapter, which is something I do agree with.

Chapter 7: Focus on what I can do rather than what I can’t do: The element of reframing things positively comes back in this chapter, along with the element of “won’t” versus “can’t”. But most of the chapter is about looking at strengths and steps forward, the positives, rather than inabilities, weaknesses, and the past. Don’t ask your child to do something in a way they can’t or have difficulty with, and don’t expect them to do things that they have difficulties with; focus on what they can do.

Don’t set your children up to fail. Set them up to succeed. Successes will help them build self-confidence and skills to help them succeed further. Let them show you how they can do things, don’t try to force them to do things the same way you do.

Also, remember that successes are built in a series of small steps. It really is amazing how far one can go when you take things one step at a time. (Hell, one of the iconic quotes of modern-day First World (and SF) culture points this out: “One small step for man, one giant step for mankind.” Not to mention that famous quote of Isaac Newton’s: “If I have seen further it is by standing on the shoulders of Giants.”)

Chapter 9: Identify what triggers my meltdowns: Again, another hugely important chapter. (Well, really, they’re all important. Still.) This chapter explores what meltdowns are, what they aren’t, and various triggers of meltdowns. There’s even a recent image from Twitter that lists possible meltdown triggers that I’m including here, because that sums the chapter up quite well (including her counterpoints to reasons that people think trigger meltdowns but don’t): 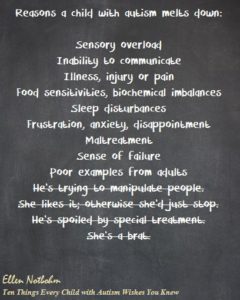 One of the other very important points brought up in this chapter is that melting down is not a choice. Having a tantrum is a choice, but we can’t choose whether or not to have a meltdown. It simply happens.

Chapter 10: Love me unconditionally: This chapter essentially sums things up, and points out some more important things.

Don’t put conditions on the love you offer. No child should have to do things in order to gain love; they should simply be loved.

Don’t force your child to meet your expectations (or to fall down to them) in order to gain your love. Encourage your child to build toward their potential, but love them no matter what happens.

Let your compassion and your parental instincts lead the way.

Overall, an excellent book, and one I highly recommend, especially for parents new to the autism diagnosis.