So, I’ve mentioned Neurodivergent Rebel’s Twitter sessions of #AskingAutistics before, in my post about grief and coping with it. On Saturday (the 13th), she posted about an article on Quartz Media, regarding a robot that the creators say can teach adult autistics to read emotion and facial expression nuances. According to the article, researchers at Heriot-Watt University in Scotland created Alyx. It’s generated a fair amount of irritation among autistics on Twitter, for various reasons.

I’m going to quote from the article, and then give some of my counter-points (some of which I’ve already mentioned on Twitter, but are expanded here). Because honestly, this is not going to work the way the article claims it will. Here’s why (aside from the fact that already a number of autistics are vehemently opposed to it).

Alyx was built to address a particular problem: In the US and the UK, more than 80% of autistic adults are unemployed. “And the main issue is not that they can’t do the work,” Thusha Rajendran, one of Alyx’s creators, says. “It’s the workplace politics, especially being able to understand what people really mean, rather than simply what they say. And part of that is understanding emotional expression.”

Point the First. This point doesn’t deal directly with Alyx itself, but with the ideas behind the project.

Okay, first of all – what exactly is meant by “workplace politics”? The quote above seems to imply that the term refers to the social niceties of NT human interaction, just in the workplace as opposed to anywhere else. But there’s more than one definition for so-called “workplace” or “office politics” – and some of them involve a toxic environment.

Secondly, I’d like to know where the project people got the idea that most of the fault lies with our lack of understanding of workplace politics/nuanced NT social interaction. Yes, I’d say some of it does lie with that. It is a fact that autistics tend to have trouble with NT social interaction. I won’t dispute that.

What I will dispute is the implication that that’s the major reason that adult autistics who can work are unemployed. For me, at least, what really causes issues with employment are two other elements: sensory issues, and autistic burnout. (Not to mention getting through the interviews. Learning to read NTs won’t necessarily help with that!)

Sensory issues: Fluorescent lighting is one. Sound is another – I could never work any job in a restaurant, because I can’t tolerate the sound of cutlery touching. Nowhere I’d have to deal with alarms going off, or vacuuming going on (see my post on Nerves Like Exposed Live Wires for an example of what that does to me). I can’t work somewhere where there’s power tools being used. I can’t do outside jobs, because of my heat allergy (which may or may not be related to autistic sensory issues – that I don’t know about, and I doubt we’ll ever get any definite answers for). I can’t work in retail, not because I can’t “pass” for a bit, but because the sheer number of people I would have to interact with would have me in meltdowns by the time I was two weeks in. I can’t work anywhere where there are artificial scents involved. (Meaning no cleaning work, no working anywhere with a perfume counter, no working in bath and body shops, etc.) None of this has anything to do with social interaction (well, the crowds a bit, but it’s more than just the social interaction with that – also, see Point the Third).

Autistic burnout: This is what happens when an autistic has been “passing for normal” for too long. I hit it around 2008-2012, and have not yet recovered fully. And do you know what? This whole thing with Alyx, and teaching expressions – that’s feeding into the whole “passing for normal” gig. There are reasons that supports and accomodations are a legal right. What is so hard about asking your manager to give you explicit (whether verbal or written) directions and feedback? Because if they’re not willing to do that, there are more problems going on than an inability to read NT social interactions.

Adults with autism often find it difficult to read subtle emotional cues that other people may take for granted, and teaching them how to recognize those signals can be a challenge. … Alyx’s face is simple, with very few features: humanoid, Rajendran explains, but not human-like. And that’s on purpose; human faces generate lots of small extraneous signals that people with autism can find difficult to decode. 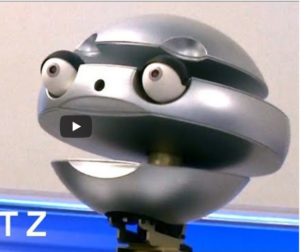 This is Alyx, the so-called “Robotic Emotion Teacher”

Point the Second. Okay. Take a look at that face.

The eyes can move out (though not down, up, or to the side independent of the facial movements, based on the video). The eyelids move. The “mouth” moves. The three sections of the “face” can “open up” (separate in front) or “close down” (squish together in front) – examples are in the video at the link to the article above.

Okay. So Alyx can imitate some expressions. The basic ones. Sad. Scared. Angry. Happy.

So, what does it mean when you look at someone smiling, and the very top of their bottom row of teeth is showing? According to Alyx, they’re smiling, therefore they’re happy – at least, that’s what I picked up from this article. According to human anatomy? It’s fake.

Also, how can they tell the difference between sternness/anger, mad, intensity/attention, and perplexed? All those four involve things like position of the eyebrows (which Alyx doesn’t have) and subtle mouth shifts (which Alyx can’t do) to differentiate between them.1 And those are some pretty important emotions for the workplace!

That part about the “small extraneous signals” in the article… you know, it’s those signals that are the clues to a lot of these expressions and emotional interaction. You want to teach someone what different expressions look like? There are a whole bunch of charts out there with that information. Heck, smileys can convey a fair bit of the information that Alyx does.

Yes, I suspect that Alyx can legitimately teach the basics. (And I have to admit they’ve done a reasonable job with the eyelid movements, though the fact that Alyx’s actual “eyes” can’t move without the rest of the face moving is a problem.) But it’s the subtleties that are the biggest problem, and the very nature of Alyx’s “face” prevents those subtleties from being shown.

And there’s another element that has to be taken into account – Point the Third. Information overload.

When I’m around just one or two people… as far as I’m aware, I do okay on the reading body language stuff. (No one’s told me otherwise, at least.)

It jumps to being around three people – I can’t anymore. There’s just too much information coming in too quickly for me to process. In part because I have to actually analyze the body language I’m seeing (even if I manage to do it on a semi-unconscious level by this point, it’s still not instinctive, and it takes energy), and if there’s more than two other people around, I can’t think about it quickly enough to keep up with the conversation. So I have a choice – either analyze the body language, or pay attention to the conversation going on. One or the other, I can’t do both.

For a lot of autistics, it may not be exactly the same, but the fact is that we find it easily to get overwhelmed with sensory information. Especially if we’re in a stressful situation. (There are times when I even have to close my eyes in order to make sure I can pay attention to what’s being said, and remember it.) And if that happens – and it can quite easily (like, say, waiting to hear from our manager about something we worked on?) – it doesn’t matter how much we’ve been taught about body language and facial expression. It’s not going to matter, because we simply can’t process it.

As I said in one of my tweets about the situation: “There’s only so many things the mind can focus on at once, and for me, at least (and I suspect for most of us) body language is coded as less important than other things in our environment.”

In a training session with Alyx, a user would perform a clerical task, like filing paper, and Alyx would respond with a sign of approval or disapproval. Alyx’s creators say this is the main hurdle that adults with autism need help getting over: Knowing whether or not they’re doing a good job.

Point the Fourth: Um… what?! Okay, I find that last sentence to be incredibly condescending. Have they asked autistic adults about this? If so, how many? How large was their sample size? And if not… honestly, it’s become another issue of NTs looking in from outside and interpreting what they see from their own perspectives. I’m not claiming to speak for all autistics myself, but I know that a number of those I know – as well as myself – have other issues that they (and I) are more concerned with regarding employment than that!

And again, I repeat my point above about accomodations, and the fact that it should be neither unreasonable nor difficult for one’s manager to provide explicit feedback, written or verbal, as to whether a good job was done or not.

So, that’s my rant about the matter. Would love to know what you think. Do you think there’s something I’ve missed here (whether for or against Alyx)? I’d definitely be interested in knowing! Please, let’s talk about it!

1. Reference for expression elements: The Artist’s Complete Guide to Facial Expressions, by Gary Faigin. Excellent book, highly recommended for those who want to learn about the subtleties of expression and how our cranial/facial anatomy plays into them. Not just for artists.

2 thoughts on “Let’s Talk About: Alyx, The “Robotic Emotion Teacher””